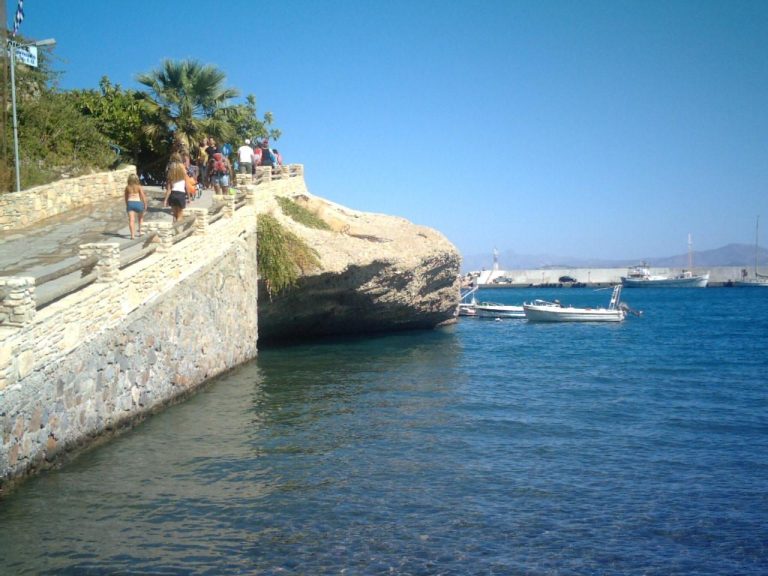 Agia Galini is a popular seaside resort, located 61km southeast of Rethymno and 68km southwest of Iraklion, on the southern shores of Amari. The name of Agia Galini means “Holy Tranquility” or “Holy Serenity” in Greek, implying that this place is very peaceful and the sea is always calm. The excellent pebbly beaches, the picturesque harbor and the traditional village attract thousands of tourists every year. Before the ‘60s and ‘70s, when it met a large tourism development, the village was a small fishing village that actually served the residents of the neighboring Melabes village. But later, in ’60s, Agia Galini became a favorite destination for the liberated flower children, the hippies. Indeed, there are still many fans of the area, who visit the village every year since then.

Today Agia Galini is a modern resort, with a traditional character, which offers all amenities to its visitors. You will have many options for accommodation, food, entertainment, medical services, post office, banks, shops etc. Agia Galini is built on the slopes of a high mountain, near the mouth of the River Platys or Amarianos, which starts from the village Thronos and has water all year round. The houses of the village are overlooking the vast Messara bay and the South Cretan Sea.

The southern outskirts of Psiloritis rise a few kilometers northern of the village, surrounded by wild and imposing cliffs and with several traditional villages hanging over them. West of Agia Galini, along the coastline, many beautiful rugged caves are shaped, which you can visit only by tour boat. One of them is called the Cave of Daedalus, because they say that it was the workshop of the legendary craftsman and artist Daedalus. Boats also run from the harbor to the nearby beaches such as Agios Georgios, Agios Pavlos and Preveli. Opposite of Agia Galini, there are the two islets of Paximadia (i.e. Nuts), which can be reached by tour boat. Moreover, there is an unknown beach with pebbles on one of them.
Agia Galini is built on the site of the ancient Minoan harbor of Syvritos (today’s Thronos village), which was called Soulia. Archaeological excavations in the area have revealed several findings. Remains of columns and a temple, which was dedicated to the goddess Artemis, have been found near the river. Also, archaeologists have discovered a Roman ship wreck of the 3rd AD century. Figurines, lamps, statues, bronze objects have been found in it and are currently exhibited at the Archaeological Museum of Rethymnon city. Soulia was destroyed by the Saracens in 640 AD. When the Greeks became Christians, they built the Monastery of Serene Christ (Galinios Christos) on the ruins of the temple of Artemis. You still can see in the cemetery, just outside the village, the church of the monastery, now dedicated to Virgin Mary (Panagia). Lastly, next to the west end of the harbor, there’s a tall rock. According to mythology, Daedalus and Icarus and Icarus started their flight from that point, in order to escape from king Minos. You can visit the monument on the rock, with two modern statues of the first airmen in mythology.

Several versions have been heard on the origin of the weird name of Agia Galini (i.e. Holy Tranquility). One of them states that when a Byzantine princess traveled to the Jerusalem, her ship fell into a big storm. She started praying to Mary, begging for help, and vowed to build a temple dedicated to her. Indeed, the ship managed to approach the area and to anchor in the sheltered bay of the village, that is never wavy. The faithful princess built a temple and named it “Panagia Galini”, i.e. Virgin Mary of Serenity, which was later paraphrased to Agia Galini. This church is the old church in the cemetery. Moreover, the name can be derived from the greek words “aei galini”, meaning “always calm”. Agia Galini can be accessed by bus from Heraklion, via Tymbaki. Additionally, there are buses running from Rethymnon, via Spili. If you come by private car, estimate that you need 1 hour from Rethymnon and 1:15 hours from Heraklion.