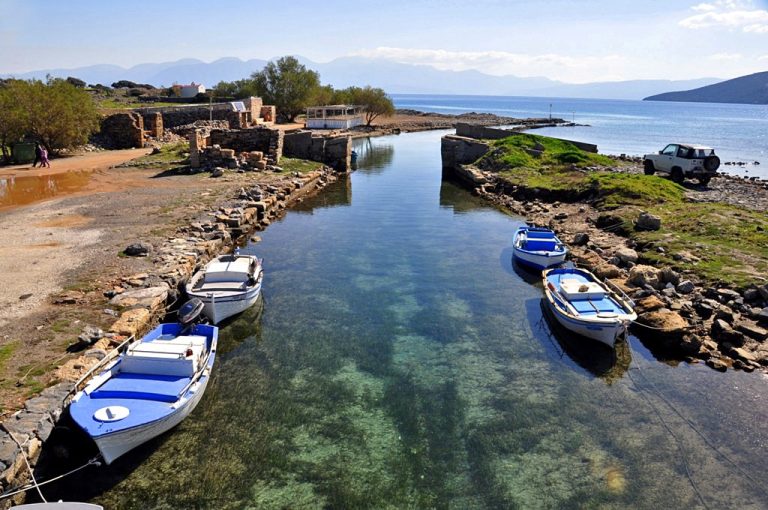 Elounda is located 10km north of Agios Nikolaos, near the northwest side of the bay of Mirabello. The area is a renowned tourist resort with luxurious hotels for the most expensive tastes. Each year Elounda hosts in utmost secrecy several heads of states and celebrities of the international economic, political, athletic, and artistic elite. Indeed, it is no coincidence that Elounda has the most landings of private helicopters in Greece!

Apart from its glamorous face and the €10000/ night bungalows, Elounda has to offer to its visitors some of the most beautiful landscapes in Greece. The small town of Elounda is not particularly graphic, but it is built on the edge of the idyllic lagoon of Korfos Bay, which is formed between the Spinalonga Peninsula and Crete.

A short tour around Elounda

From the first moment you see that from the Lenika area, where you can stop and see the view, while driving from Agios Nikolaos, Elounda is astonishing! From Lenika you can see Mirabello Bay and the lagoon of Elounda (or Korfos), the long peninsula of Spinalonga that is connected to Crete within a very narrow strip of land. In the background, you’ll discern the picturesque village of Plaka and the long-suffering island of Spinalonga (formally Kalydon), which you can visit by boat running from Elounda harbor. Instead, close to you and on the hillside south of the peninsula Spinalonga you will see the famous 5 and 6 star hotels of Elounda. They are all built by the sea and host some lovely small beaches and private coves, where you’ll see very expensive yachts occasionally.

Continuing driving in your car (or by bus) and after leaving back the big hotels on your right hand, you will reach the small town of Elounda (or Schisma as the locals call it). It’s a rather non-impressive little town, where you will have many choices for food and accommodation in rooms and small hotels. You can stroll around the harbor and enjoy your coffee in the cafes next to it.

From Schisma, you can drive to the east and visit the peninsula of Spinalonga. A feature of the area is that at one point, the road runs along a very narrow strip of land, with the sea on both right and left side. At the beginning of this street, on your right hand, you will see the old salt pans of Elounda, which were the major source of revenue during the Venetian period, supplying Europe with salt. Today the abandoned salt pans are home to many birds all year round. Some are rare in Europe, such as flamingos and herons.

Continuing driving, you will meet the old stone windmills and a wonderful stone bridge, in one of the most picturesque places on Crete. Below the bridge, there is a very narrow canal, called Poros (=canal), which was opened by the French Army in 1897 in order to link the Gulf of Mirabello Bay with Korfos Bay. In Peninsula Spinalonga (which some mistakenly call Kolokytha) you will see many abandoned farms that are now is a haven for many species of animals and plants. It is worth driving to the chapel of St. Luke, with superb views to the opposite small island of Kolokytha. Just opposite the church, there is a small path leading to the beach of Kolokytha, famous for its turquoise waters. 1.5km north of the beach, you’ll find the Byzantine church of St. Phocas where you can go on foot.
History

Elounda is built on the site of the ancient city Olous, one of the strongest cities of Crete. Over the centuries it was known by the names Olous, Olounda, Hersonisos, Amylka, Amyklion, Kolokytha Olous, Alyngos, Naxos, Axos, Oxa and Kadistos. The exact location of Olous is placed in the area of Poros, next to the salt pans, where remains of a sunken city have been found. Reports say that Olous hosted the magnificent statue of Vritomartis (the Cretan version of Artemis), which was a work of the renowned sculptor Daedalus. Other gods that were worshiped in Olous were Zeus and Mars. The city flourished because of trading grindstones for polishing metal, extracted in the quarries of Karfi area.

Another famous city that was very close to Olous was Naxos, which was on top of the mountain today Oxa, south of Elounda. It is said that the city was built by Naxos, Akakallida’s son (daughter of Minos), who later founded colonies in the Cyclades Islands. Indeed there is an island called Naxos in the Cyclades.

Olous was inhabited during the Greek, Roman, and Byzantine period (824 AD). A tentative finding of continuous habitation is the aisled basilica of the 5th AD century that was built on the site of an ancient temple. Later, the second Byzantine period was disastrous for all the coastal cities of the island, because the pirate raids of the Saracens and the weakened Byzantine fleet forced the inhabitants to move inland. In 961 AD, Nikiforos Phocas liberated Crete from the Saracens and that is why the Cretans built the church of St. Phocas on Spinalonga Peninsula, opposite the island of Kolokytha.

During the Venetian rule (1240-1210), when the channel in Poros was firstly opened, the salt pans were very important and, thus, Venetians built the fortress of Spinalonga so as to protect the whole bay of Korfos. Later, Elounda and the channel of Poros were destroyed by the Turks and the town was almost deserted in 1898. When the British, French, and Russians finally forced the Turks to abandon Crete, the inhabitants of Elounda returned and reopened the channel. Later, the flat sea was used in 1928-1939 as a port for the seaplanes of the English company Imperial.

In 1941, during World War II, Elounda was occupied by the Germans and was turned into one of their strongest bastions, making the coast a vast minefield. Later the coasts were cleared, allowing space for the construction of the first major hotels that today keep Elounda at the forefront of the most luxurious destinations.