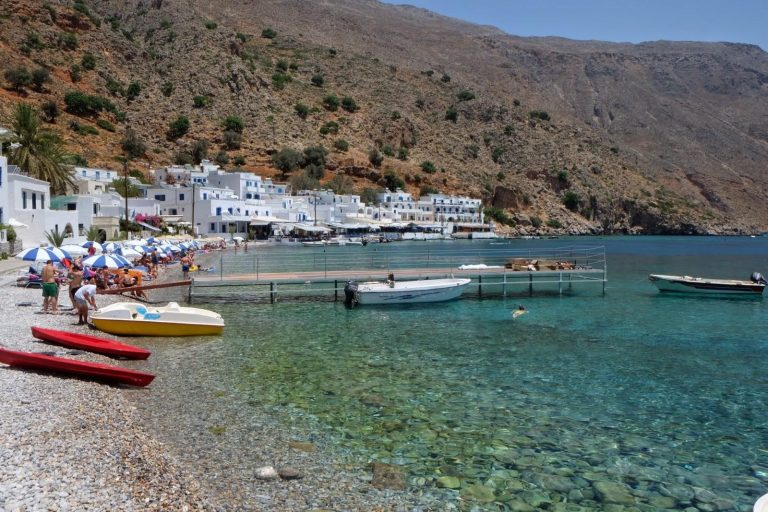 Loutro is a small seaside village situated approximately 71 km south of Chania city, at the end of Cape Mouri. It was the site of the ancient city of Phoenix and was the port of ancient Anopolis. Later, it became the “winter” port for Chora Sfakion, due to the fact that the enclosed bay and the small island at its entrance create a natural harbor where ships can be safe even in very bad weather.

You can stay at Loutro and use it as a base for visiting surrounding beaches, either by taxi boat, canoe or on foot. You can get a small ferry to the magestic beach of Glyka Nera east of the village. Moreover, you can canoe or walk in the E4 trail till the adjacent unorganized pebbly beaches of Timios Stavros and Pervolaki and then continue to Glyka Nera. However, if you want to stay at Loutro, the small beach in front of Loutro and the longer beach right after the east end of the village, called Keramos, are a very good choice, especially when wind from South is strong. The beaches are pebbly, well-organised and the water is always calm and has an amazing deep blue and green color. Moreover, you could either walk or catch a boat to the closeby beaches of Likos, Finikas and Marmara.

Loutro is a place for those people who want something different. A small picturesque fishing village in south west Crete, not yet spoilt by mass tourism. For example there are no big hotels with swimming pools. There are no overcrowded streets, restaurants and beaches, there are no cars! The only access is by boat or as you wish, by foot (1.5-2 hour trekking from Chora Sfakion). There are daily ferries to/from Chora Sfakion, Sougia, Gavdos island, Paleochora and Agia Roumeli.