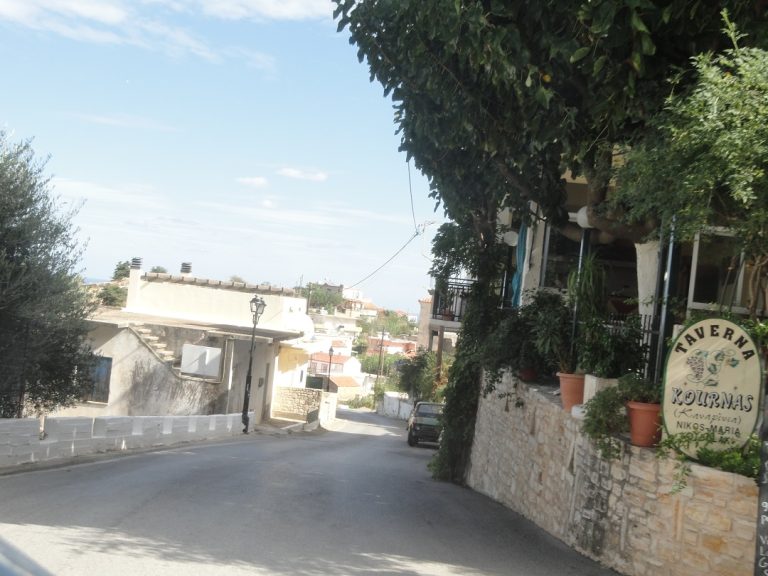 If you’re going to Lake Kournas, it’s worth travelling another 15 minutes up the winding uphill road to Kournas.

While the lake is ‘touristy,’ Kournas village, like many villages in Crete’s interior, is utterly undisturbed by tourism and transports tourists back in time (these lines were written in 2009, and I hope I won’t need to update them in the future…

In the town of Kournas, the historic buildings, the village square, the pottery studio beside the enormous kafeneio, and Agapinakis’ taverna “Kali Kardia,” with its exquisite salads and superb meat, are the first things you will notice.

The town of Kournas does not have any tourist amenities, but Georgioupoli, which is close by, has all you would need.

The church of Agios Georgios is located in the village of Kournas, and a road leading to it may be found to the right of the plaza. It was constructed during the Byzantine period, with architectural characteristics added during the Venetian period. The church is locked, so you won’t be able to peek inside unless you locate someone in the neighborhood willing to lend you the key, but it’s worth a go.

Between the hamlet and the Kournas Lake is Kournas Cave, a lovely cave with a beautiful view of the lake. Although the cave is modest (only 35 meters deep), it features spectacular stalactites and stalagmites. The cave is gloomy in the afternoon, but the small amount of light that comes in makes it very magnificent.