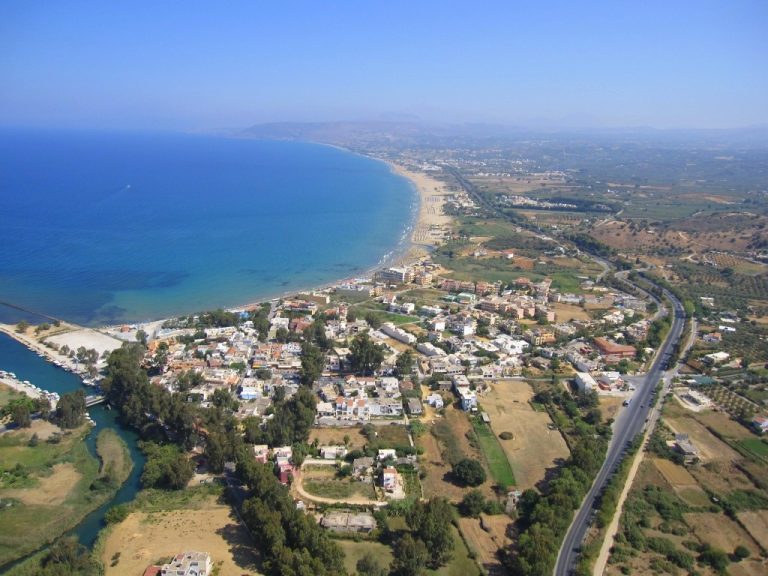 Georgioupoli is a popular seaside resort located 38km east of Chania and 21km west of Rethymnon. It is a small coastal town, situated in a lush valley full with rivers and springs. Locals, apart from tourism, deal with beekeeping and agriculture. The river Almiros crosses the town. Before the town, there is the Almiros marsh, where very important animal species are sheltered. One landmark of the village is the road and the square with the numerous eucalyptus and cypress trees. The square is full of restaurants, cafes and tourist shops. At the exit of Almyros, you will meet the picturesque harbor of the area. But the town’s highlight is the picturesque chapel of Saint Nicholas (Agios Nikolaos), that is built on the end of the small pier. The church from far looks like floating on the sea surface.

The area of Georgioupolis is inhabited at least since the Minoan times. A Minoan tomb has been found on the hill Kastelos. Georgioupolis is located in the site of ancient Amfimalla, which was the port city of Lappa (currently Argiroupoli). Indeed, several devotional findings have been excavated.

During the Byzantine period, Saint John Xenos founded the Monastery of Saint George in Dramia. During the Venetian Era, this fertile region was very important for the invaders, who built a fort. It was later destroyed by the Turks, who built a new one by using the materials of the old one. Unfortunately, the fort is now damaged.

During the 19th century a big part of the marshland area was dried, in order to save space for new cultivations. Many new residents were then attracted. This created a fairly large settlement, which was named Almyroupoli (i.e. Almiros town), named after the local river. However, the name changed very soon to Georgioupolis, in honor of Prince George, who gave assistance to locals for the of Crete with Greece.
Πηγή: ⭐ Travel Guide for Island Crete ⛵, Greece❗ – Georgioupolis Town cretanbeaches.com
https://www.cretanbeaches.com/en/cities-and-towns-in-crete/georgioupolis-town