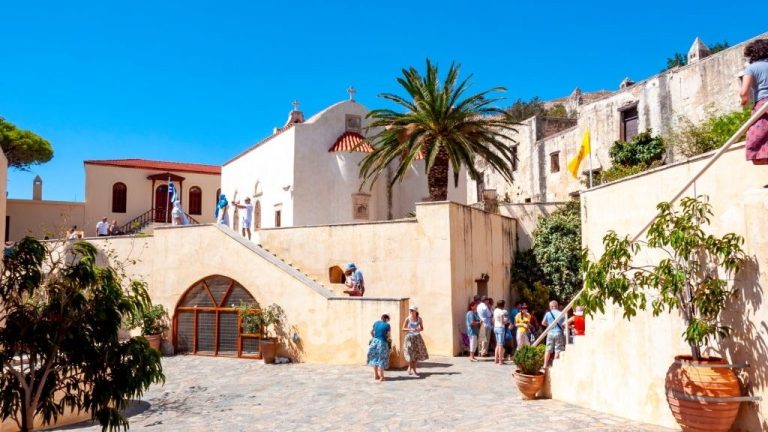 On the southern edge of Rethymnon Prefecture, Crete, the Preveli monastery may be found on the steep slopes of Preveli Canyon. It comprises of two monasteries, the Lower or Kato Preveli and the Upper or Pisso Monastery of Agios Ioannis Theologos, which is dedicated to Saint John the Baptist and located about 3 km away from Kato Preveli. The monasteries date from the middle of the sixteenth century. They have been damaged several times throughout the years, yet they have always been repaired. The monastery is claimed to have gotten its name from the noble Preveli family of Rethymnon, who helped restore it in the 18th century.

Kato Preveli is a typical Orthodox monastery, featuring John the Baptist’s church in the middle. The monks’ cells, as well as several other structures, are housed in the rectangular courtyard. The monks choose to spend the most of their time here rather than at Pisso Preveli, which is now empty but nevertheless provides for a lovely location hidden amid the mountains.

During the battles, many of the monastery’s treasured relics and icons were plundered. The remaining items may be seen in Kato Preveli’s Ecclesiastical Museum, which houses holy vestments, relics, icons from the 17th century, and a historical cross depicting Jesus Christ’s Baptism that was used as a war flag.
The Kato Preveli Monastery is comprised of a double-aisled basilica surrounded by a complex of buildings that house the dining hall, food storage, guest reception, and meeting spaces. The monk’s hostel, which is located near the great dining hall and has exits to the mountain slopes, was especially valuable in times of conflict in the past. As a supply of water, an antique fountain with the inscription 1701 is still in operation. The icons of Saint John and Saint Charalambos, as well as the biblical frescoes, are from the 16th century and are works of painters from the Cretan school of painting.

During the Cretan freedom fight, the Preveli Monastery acted as a safe haven for troops and rebels. The monastery’s monks have always played an essential part in Crete’s history, offering sanctuary to Cretan warriors despite the fact that doing so puts their lives in peril. Today, the monastery is available to the public and offers a breathtaking perspective of Crete’s rocky landscape.