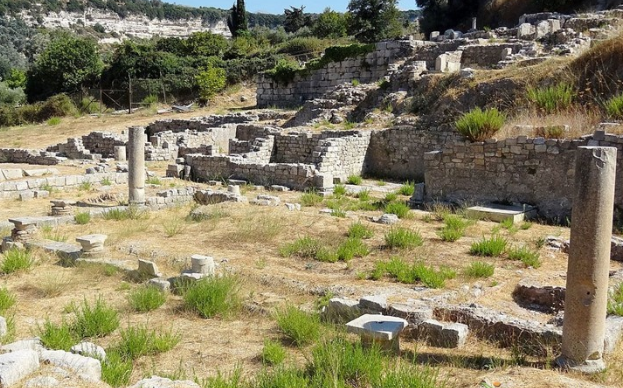 The archaeological site of Eleftherna is located approximately 30 kilometers south of Rethymno, on the northern foot of Psiloritis Mountain, between the ancient and contemporary Eleftherna settlements. Eleftherna is one of Crete’s most important archaeological sites, providing valuable insight into the settlement’s evolution over time. In reality, the village appears to have been inhabited since prehistoric times and continues until the Early Christian era.

The initial excavations were conducted by a British team in the late 1920s, and researchers were taken aback by the massive discoveries found. However, there was still a lot to be discovered. Since 1985, the University of Crete has been involved in a fresh excavation project that continues to this day.

The ruins of Orthi Petra, Pyrgi, and Katsivelos, which are located on the slopes of Psiloritis Mt, between two creeks that run around its foot, are among the most notable sites discovered during these excavations. The accessible drinkable water from these springs had a significant influence in the inhabitation of the area and its agricultural occupation.

A necropolis from the Geometric Era and the Archaic Period, as well as the remnants of various structures and roadways from the Hellenistic and Roman periods, were also discovered. At addition, a three-aisled Basilica from the early Christian period was discovered in Katsivelos, with exquisite mosaic design. Pyrgi, at its highest point, was most likely the ancient settlement’s urban center. Nearby, the remnants of three structures from the Roman and Christian periods, as well as a spectacular Hellenistic bridge with a pointed arch, were discovered.

Aside from all of this, the archaeological site of Eleftherna also has remnants of ancient fortifications, cemeteries, sanctuaries, an aqueduct, massive cisterns, and paved Roman roadways. The artefacts discovered during the excavations on these sites are now divided into three categories: Polis and Acropolis, which are associated to public and private daily activities, and Necropolis, which displays ancient societies’ beliefs about life after death.