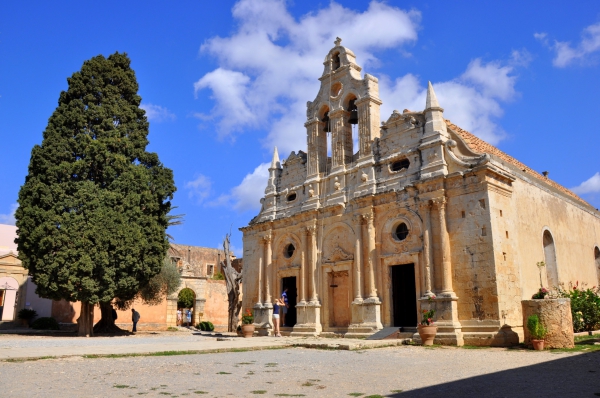 Arkadi is a historically significant location, noted for the events that occurred during the 1866 revolution. The monastery is situated on the high plateau’s edge. This is one of Crete’s most important monuments, as well as a popular tourist destination.

The first fortressing component of the monastery, located 23 kilometers southeast of Rethymno and 500 meters above sea level, was erected in the 12th century, according to legend, by an Arkadian monk. Another legend claims that the monastery was named after Arcadius, the Byzantine ruler. The church dedicated to the Savior’s Metamorphosis, Agios Konstantinos, and Agia Eleni is the most important portion of the Monastery of Arkadi.

The monastery is fairly huge, with fortress-like high walls. The events of November 1866, when Crete rose against the Turks who had ruled the island for the previous 200 years, made this holy site well-known. When Turkish forces broke inside the monastery after a long siege, the besiegers, headed by a monk, set fire to a chamber full of gunpowder. The explosion, which killed everyone within the monastery as well as the majority of Turkish soldiers, was a desperate attempt by the besiegers to stay free and avoid falling into the hands of their enemy.

This event represents Cretan liberty and makes the Arkadi Monastery one of Crete’s most well-known monasteries. A few monks still reside there, looking after the church and the surrounding structures. A modest souvenir store inside the monastery sells handcrafted products and excellent replicas of Byzantine icons.

The monastery also has a fascinating museum with a large collection of post-Byzantine icons, 16th-century pontificals, blazonry, and relics from many revolutions. A memorial building dedicated to the Cretans who perished in 1866 stands outside the monastery, with the remains of the dead on display.