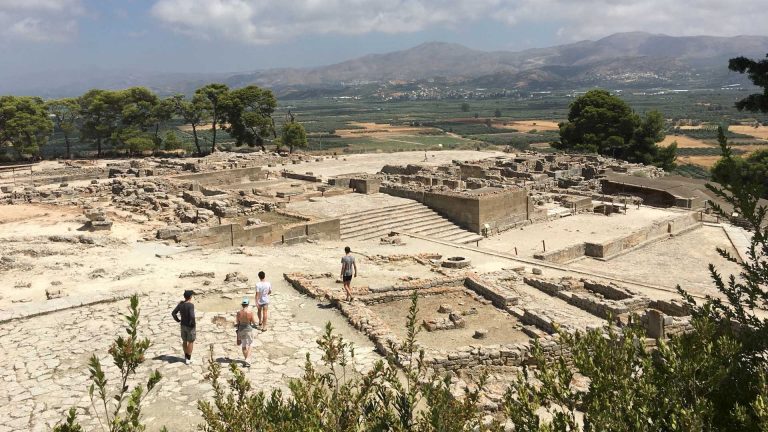 In South Central Crete, the Palace of Phaistos is located on the east end of Kastri Hill, near the end of the Messara plain. It is regarded as one of the most beautiful Minoan palaces. The remains of the ancient and new palaces may still be seen today. Excavations in the region began in 1884, with F. Halbherr and A. Taramelli leading the way. Following the independence of the Cretan State in 1898, F. Halbherr and L. Pernier resumed the work between 1900 and 1904.

Doro Levi, with the assistance of the Italian Archaeological School of Athens, continued the excavations between 1950 and 1971. Thousands of seal impressions and tablets carrying the Linear A script were also discovered in the vicinity.

The Old Palace was constructed in the year 2000 B.C., during the Protopalatial Period, and was in use for nearly three centuries. Earthquakes damaged it twice, but it was restored. Archaeologists have identified three separate periods as a result of this. Levi claimed that the first two sections were Crete’s earliest palace structures.

Visitors can see some of the ruins, including the region where the Phaistos Disc was discovered, but the most of it is exclusively accessible to specialists. Excavators have been perplexed by the paucity of findings expected at a Minoan palace on the site of the New Palace. There have been no frescoes, tablets, or seals to be found.

Some archaeologists and scholars believe this is because the New Palace was constructed at a period when Phaestos’ status was waning due to the ongoing growth of adjacent Agia Triada. The site’s entrance is on the same level as the Upper West Court, which served both the Old and New Palaces. The Upper West Court and the Lower West Court are connected by a stairwell. To the north of the court, there is a high wall, in front of which lies the Theatrical Area, which has two elevated walkways. Spectators sat or stood in eight rows to see the rituals, performances, and religious rites that took place there.

As with most other palaces, the palace is aligned north-south. The West Court served as the primary entry to the New Palace, leading to the 14-meter-wide Magnificent Staircase, which led to an equally broad platform, where the West Propylon, one of the most spectacular structures of its kind, stood. There were two porticos between the platform and the entrance.

To the south of the Propylon lies a storage facility. It had 10 rooms on each side, with five rooms on each side. These 55 by 25 meter storerooms are located to the east of the Central Court. On two sides, porticos with alternating columns and pillars bordered the walkway.

There were also two lustral dumpsters in the neighborhood. Cult jugs and figurines, as well as double axe forms etched on the stone, were discovered in the West Wing, indicating that this area of the Palace was utilized for religious activities. In truth, it is often assumed that the west wings of palaces were utilized for religious and administrative reasons, while the east wings served as royal families’ residences.

The northeast wing of the palace is said to have housed craftsmen’ workshops, and the ruins of a metal-smelting furnace can still be seen in the courtyard. This is also where the royal apartments are located. Light wells, porticos, and pier-and-door walls were all included in these rooms, allowing portions of the space to be closed off. Alabaster stones were used to line the lower walls and flooring.

A lustral basin, to the west of the king’s palace, is possibly Crete’s best-preserved basin. The southeast wing of the building collapsed at some point and is now defunct. Today, the Archaeological Museum of Heraklion houses all of the palace’s artifacts.

Phaestos is a must-see destination for anybody visiting Crete. For one reason, the stunning natural surroundings should not be overlooked. Unlike Knossos, where scaffolding has disfigured the Palace and most of it has been roped off to prevent people from viewing it from afar, Phaestos is an up close and personal experience. The location is virtually never crowded, allowing you to take your time and explore the area at your leisure, taking in some of Crete’s most breathtaking vistas.