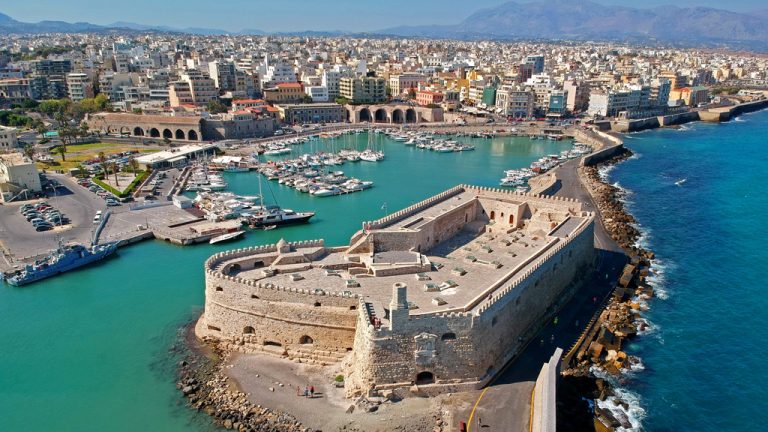 Koules, which meaning stronghold in Turkish, is the name given to Heraklion’s Venetian Castle. It is a gigantic fortification that encircles the harbor of Heraklion in Crete. The Koules Castle is a two-story fortress that used to guard the entrance to the port. The fortress was erected by the Venetians when they conquered the town in the early 13th century. In 1429, a Florentine monk named Cristoforo Buondelmonti penned the earliest chronicle of the Koules Venetian Castle.

The Fortress was primarily built to store food and military supplies. It was also utilized as a prison and an officer’s quarters. An earthquake in 1303 completely destroyed the castle, which the Genoese rebuilt. Between 1523 and 1540, the fortress was restored and given its final design. During Ottoman rule, the Castle was once again utilized as a prison. Several Cretan rebels were imprisoned and killed in the castle’s dingy dungeons.

The Castle was constructed in the typical Venetian style. The castle’s walls were constructed in such a way that they could protect the breakwater of the harbor. The castle was built entirely of stones. A huge fanlight is located on the ground level’s vaulted ceiling. The sturdy walls of the castle were split into 26 chambers, one for Kastelanos, the officer in charge of the fortress’s well-being, and another for the captains and other officials.

Similarly, the storage was on the ground floor. Three carvings of Saint Mark’s Lion were found in the Castle. The one near the castle’s shore has survived to this day. The top storey and the foundation for a minaret were constructed by the Ottomans to the original edifice. Several times, the Venetian Castle of Koules has been cleaned and repaired. It is the symbol of Heraklion Town and attracts thousands of visitors each year.