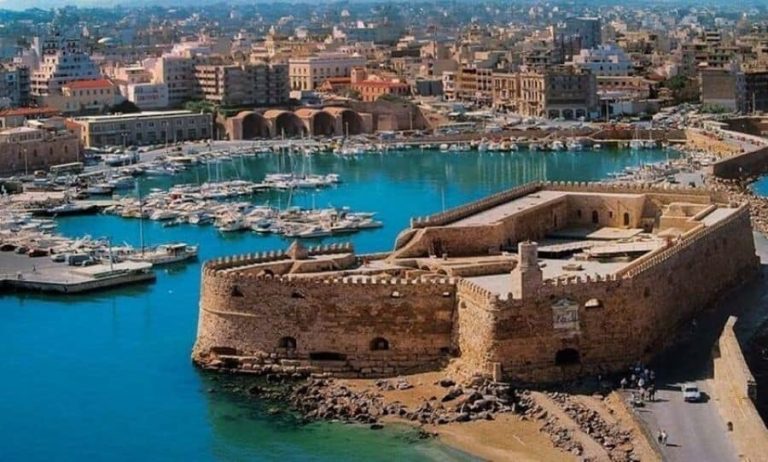 The most popular region of Crete is Heraklion, which is situated between Rethymno and Lassithi on the island’s eastern coast. Heraklion Town, the magnificent headquarters of the Heraklion area, is one of Crete’s major metropolitan centers.

Knossos Palace and Phaistos Palace are two of the most prominent Crete monuments, both located in the Heraklion district.
The Minoan Palace of Knossos is the biggest of all Minoan palace constructions, measuring over 20,000 square meters. The ruins of brilliant paintings, powerful red columns, and the magnificent royal room will transport you to the Minoan period.
After Knossos, the Minoan Palace of Phaistos is the second most important Minoan site. It’s on the east side of Kastri Hill, with a lovely natural location that draws history buffs from all over the world!

Heraklion Town, the capital of Heraklion, maintains its fairytale atmosphere despite its frequently busy city center. You’ll see the Koules stronghold, the Venetian harbor, Turkish and Venetian fountains, Venetian structures, the Venetian Loggia, and museums including the Archaeological Museum, the Historical Museum, and the Museum of Natural History while strolling through Heraklion town.
If you don’t like touring, however, you should visit the gorgeous beaches! Beautiful beaches line the northern and southern shores of the Heraklion area, including Matala Beach, Agia Pelagia Beach, and Malia Beach, which was formerly a hippy haven. There are several Heraklion hotels near many of the region’s beaches for people who want to spend their vacation in Crete by the sea!